Skillet vs Frying Pan: What are the differences?

Many think that a skillet and a frying pan are two different things. Actually, they are not. To an amateur cook, they are the same. The only real difference is depth, slightly different shapes of a pan and material since skillets are often made from cast iron.

In the restaurant, we mostly used skillets for braising thick sauces, heating up stews just before serving, and many other things. I like to use skillets for searing steaks, fish, and vegetables, but you can do it as well in the frying pan.

As you can see, they are pretty much the same; however, there are a few subtle differences, and I’m going to show you what they are.

Skillet vs frying pan. Here’s what you’re going to find reading this article: 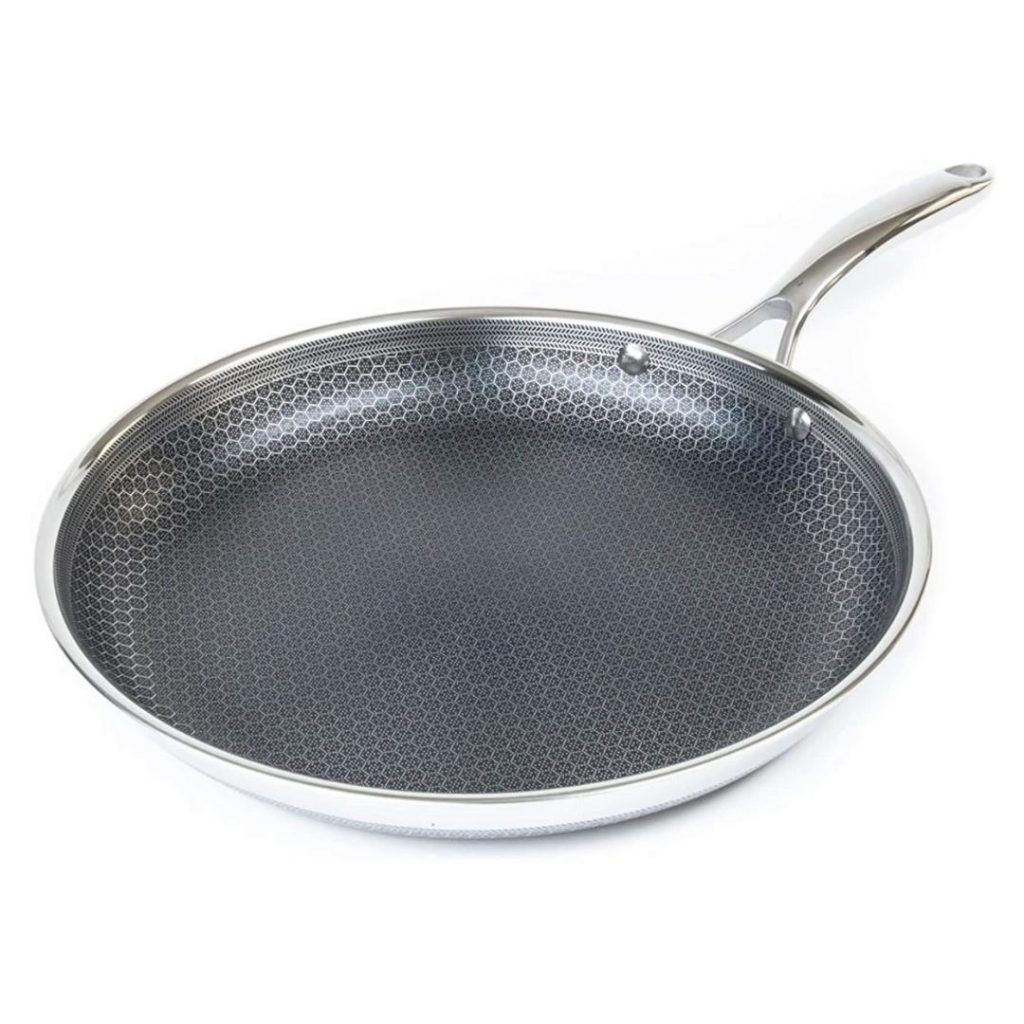 Skillet vs Frying pan: How are they different?

Most people still believe that skillets and frying pans are two different things. But when you have two pans side by side, they look very similar. In fact, to some, they look pretty much identical.

The main difference between skillets and frying pans is depth. Skillets are deeper than frying pans, and skillets come with a lid.

Skillets are mostly made from cast iron, but you can find them in other materials as well.

Frying pans, on the other hand, are often from aluminum, stainless steel, copper, and carbon steel.

To sum it up, there’s not much of the difference between a skillet and a frying pan. You can use both for frying, braising, stewing, roasting, and even baking if the handles are oven-proof. In the end, you can use both pans to do exactly the same things. There’re a few subtle differences between a skillet and a frying pan, but most of the time, only a professional chef can tell you which pan is better for what.

Since you want to know the main defining traits of the skillet and how it differs from a frying pan. Read along to find out.

Skillet has a bigger cooking surface area than the same size frying pan does.

A bigger pan surface comes with a few benefits. First, it allows you to cook more food than in a pan with a smaller surface area. For example, if you have a big family and you want to cook pancakes, a skillet is by far a better option. Since you can accommodate more pancakes on a larger surface area, you can serve more food.

Another benefit of a bigger cooking surface is that it retains heat more efficiently. It doesn’t cool down as fast, so the food stays warm for a more extended period.

Let’s say you want to sear a steak or small portion of vegetable quickly. The pan with a smaller surface is much better. It takes less time for a pan to heat up, which results in a quicker food preparation time.

Although a skillet and pan look very similar, there are a few noticeable differences.

In terms of shape, the skillet has slanted sides that flare outward at an angle, and it is deeper than a frying pan. Also, since most skillets are bigger, they may feature a small grab handle opposite the main handle.

The shape that defines the frying pan is its relatively low sides that flare outwards.

Skillet has a bigger capacity than the same size frying pans. Although it may appear that the frying pan is bigger – it’s not.

In fact, a skillet has a 25%-30% bigger capacity than a frying pan does. This means you can prepare more food.

It would be best to keep in mind that pan sizes are different from one manufacturer to another. Although skillets usually come in three different sizes 8 inches, 10 inches, and 12 inches. Still, the same size frying pan will hold less food than a skillet.

Skillets are available in different materials, but cast iron is still the most common one. It’s because cast iron retains heat well and cooks food evenly. Also, it’s durable, strong, and can withstand high heat. You can see many people using cast iron cookware in the oven or cooking food on a campfire. Here’s an article about how to know if you can put a frying pan in the oven

Frying pans use different materials like aluminum, stainless steel, copper, and carbon steel. Of course, these materials are less durable when compared to cast iron, but they are still great for home cooking. These pans are less expensive, and it takes less time to heat up.

We established that cast iron can be used in the oven. But can put a frying pan in the oven? Yes, you can! However, not all of the frying pans are going to be oven-safe.

One of the main advantages of a frying pan is that it’s much easier to clean. That’s because materials like stainless steel, copper, or aluminum are easier to clean. It takes time to clean a cast-iron skillet, and you need to clean it the right way.

Skillet is by far the best option for tossing food around. Its tall sloping sides are perfect for making sure that food doesn’t fall out. However, it takes some practice to learn it.

It’s relatively easy to learn food tossing in a frying pan as well. However, it requires a bit more practice since the sides are much smaller than the skillets.

As a chef, I prefer tossing food instead of using a spatula. It has a few benefits. First, you reduce the risk of damaging skillet or frying pans surface. Another advantage is that food is prone to breaking if you use a spatula to stir it. Tossing prevents from breaking.

So If you’re serious about cooking and you want to learn food tossing go for a skillet. It has by far the best tossing ability.

The rate of evaporation is caused directly by the shape of the pan. In this regard, moisture evaporates quicker in the frying pan than in a skillet.

Even though skillet and frying pan look similar, the rate of evaporation differs. The frying pan has low sloping sides. This shape allows getting more contact with air which helps for moisture to evaporate quicker.

Skillet has slanted sides that flare outward at an angle, and it is quite a bit deeper than a frying pan. This makes the evaporation process longer. Again the main reason is the shape and its tall slanted sides.

Skillet or Frying pan? Why so Much Confusion?

Yes, the skillet and the frying pan are the same apart from a few slight differences.

Most home cooks won’t even notice any differences. Only a professional chef can tell you which is better for what.

When I started learning cooking, all pans looked the same for me. When working in a restaurant, I saw which type of pan I should pick for the next meal.

And still, there’s one type of pan I need to mention. And that’s a sauté pan.

What is a Sauté Pan?

A sauté pan has tall, straight sides, and it comes with a lid. Visually it looks different from a frying pan and a skillet, but still, it belongs to a pan category. Typically they’re made from materials like copper, aluminum, or stainless steel.

How Is Sauté Pan Different from a Skillet and Frying Pan?

The only real difference between a sauté pan, and other pans its shape. A sauté pan can be easily identified across other pans, even to the untrained eye. Unlike skillets and frying pans, it has straight vertical sides and is taller.

The unusual shape allows for the sauté pan to hold more liquid which is ideal for stews and sauces.

Skillet, Saute, or a Frying Pan? Which One Should You Buy?

If, to be honest with you, all three of the pans have something different to offer. Still, they are very similar, but I would buy all three of them because you can be more versatile in a kitchen. You can be using all three pans at the same time. For example, searing a steak in a cast-iron skillet while having a sauce reducing in a sauté pan and vegetables cooking in a frying pan.

As you can see you can all three pans can be very useful. But if I had to choose one of them, I would go for a cast-iron skillet.

Cast iron skillet is the most versatile. You can stir-fry, braise sauces, bake, cook vegetables, roast, or even broil. As you can see, you can do pretty much anything you want in this pan.

Unlike skillet, frying pan has its limitations. The capacity is not as big, which can be the biggest downside to many home cooks. On the other hand, most frying pans are much lighter than cast iron skillets. For some looking for a pan that is easier to handle frying pan can be a better option.

And last but not least, a sauté pan is the least versatile out of all pans. There’s only so much you can do with it. You can use it for cooking sauces, chillis, casseroles, curries, searing large pieces of meat, or a large amount of chopped vegetables. However, a simple task like frying an egg can be challenging.

It’s a close call between a skillet and frying pan. Nevertheless, if I had to pick one, a skillet is a clear winner for me.

For most home cooks, the frying pan and skillet are going to be pretty much the same. Only when you start to become more serious about cooking you’ll see differences between the two pans. As for now, I can suggest buying a skillet because it has a little bit more to offer than the rest of the pans. And when it comes to a sauté pan, I would only consider having one if I already have either a skillet or a frying pan.

Renaldas Kaveckas
Renaldas is the founder, professional chef, and content creator at AvantGardeKitchen.com. What is his aim, you may ask? Simple. Help you to become a better home cook.
How to Season a Ceramic Pan: A Five-Step Guide
How to clean a cast-iron skillet?
How to protect glass top stove from cast iron cookware
Cast iron sticky after seasoning? Here’s how to fix it
How to Fix Scratched Non Stick Pan In 5 Easy Steps
Skillet vs Frying Pan: What are the differences?
Table of Contents