It’s hard to explain why, but I prefer using light olive oil and canola oil for searing steaks as a chef. However, don’t get me wrong – avocado oil or grapeseed oil is as good as any other oil on the list.

In this article, you’ll find a list of the 6 best oils for searing steak. I’ve included a short oil buying guideline explaining the wrong cooking oil for steak and what is good cooking oil. 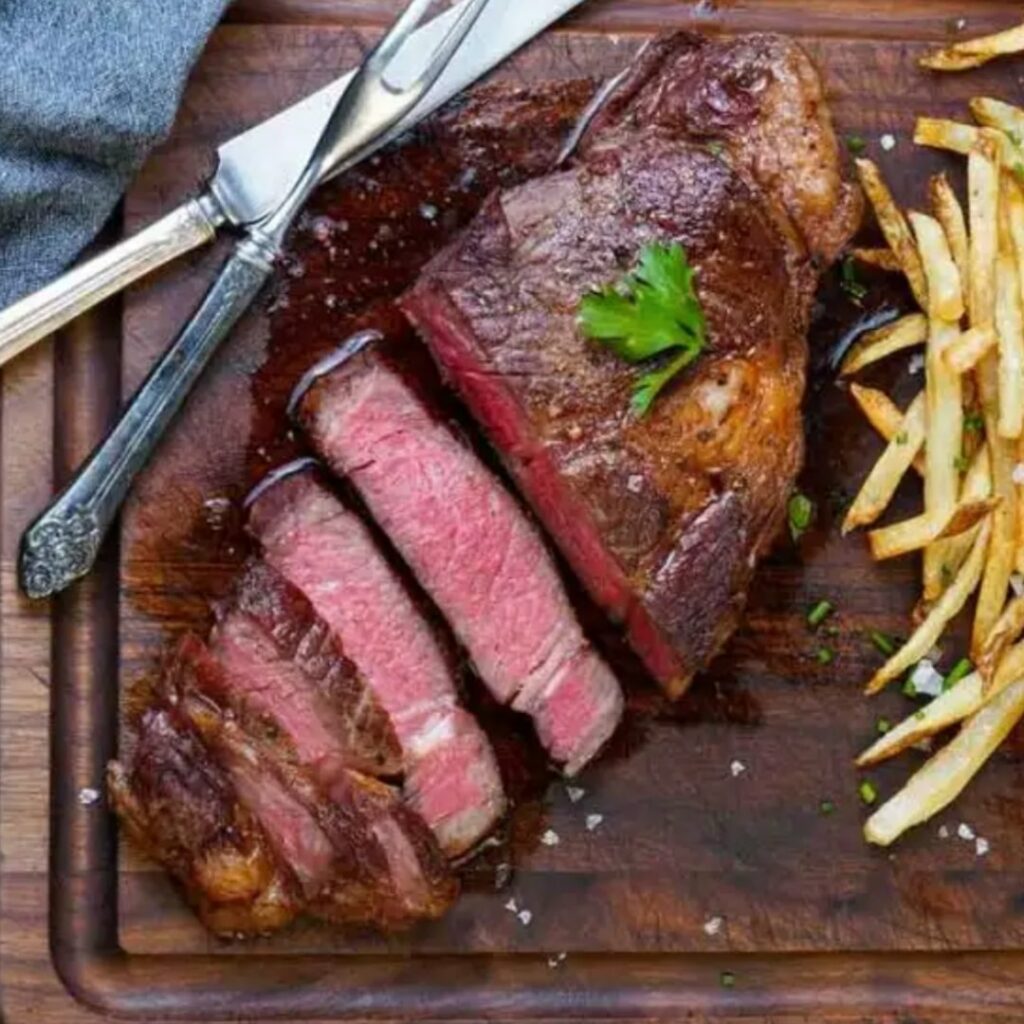 Best steak for pan searing with a bit of oil

Oils for cooking steak require a high smoke point meaning they should withstand the heat of 400°F and higher.

You can use the oils listed below for grilling steak or the pan-searing method. Place steak on a grill or a hot pan and give it a nice sear for around two minutes on each side before turning the heat down to medium. Continue cooking steak to your preferred doneness.

Refined oils have a neutral taste and a high smoke point. Refined avocado oil has a smoke point of 520°F which is more than enough for searing steaks.

Remember that unrefined oils are left in their natural state, meaning they are not processed through heating, filtering, or bleaching. Most unrefined oils have a low smoke point which is not great for searing steaks.

When cooking a steak using refined avocado oil, you’ll maintain the meat’s natural flavor. And since it has a high smoke point, it’s unlikely to burn the steak quickly.

Refined and light olive oils are excellent for cooking steaks. These oils have a smoking point of 465°F. It’s more than enough for steaks since searing occurs at around 400°F.

Light olive oil is produced using heat after the first pressing. It has a much higher smoke point than extra virgin olive oil, and it keeps longer on a shelf.

You can instantly notice that light olive oil is yellowish while extra virgin is deep green.

Sunflower oil is yet another excellent oil for searing steak. It does have a neutral taste and a high smoke point of 450°F.

However, keep in mind that all unsaturated oils break down with prolonged heating. Sunflower oil is no exception. Once the steak develops a nice golden brown crust, turn the heat to medium and continue cooking to your liking.

Ghee or clarified butter is an excellent option for searing steak and adding extra flavor to the meat.

It has a smoke point of 450°F which is more than enough for meat to develop a golden-brown crust on the exterior.

Ghee butter has a higher smoke point because it was clarified to remove water content and milk solids. The result is that ghee butter contains 99% pure fat.

The cooking process is the same with ghee butter as with any other oil.

Canola oil is processed from canola seeds, and it’s excellent for searing steaks because it can withstand high heat. As you may already know – a higher smoke point is better for searing meats. Canola oil has a smoking point of 400°F.

Grapeseed oil comes from grapes, and it’s excellent for cooking steak. It has a relatively high smoke point of 390°F. I tend not to use it for prolonged cooking, meaning I would sear a steak in a cast iron skillet and finish it in the oven.

How To Choose Oil For Cooking Steak

Here are my top tips on how to choose the right cooking oil for steak:

Here’re steaks that are perfect for searing:

Searing is a process when steak or any other meat is cooked at a high temperature until a golden-brown crust forms. For searing to occur, you either need to have a very hot skillet or a grill and some cooking oil for food that comes into contact with a hot surface.

Can you sear a steak with vegetable oil?

Yes, you can sear a steak with vegetable oil. It has a high smoke point of around 450°F which is more than enough for the steak to form a brown crust.

Yes, olive oil is good for searing steak; however, make sure it’s light or refined. The unrefined olive oil has a low smoke point, which is unsuitable for cooking steaks.

No, extra virgin olive oil is not suitable for searing steak. It has a low smoke point; therefore, it’s better not to use it for searing meats or stir-frying.